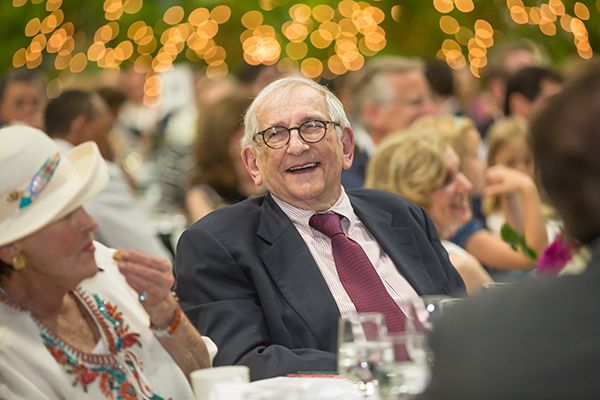 Dan Leslie Bowden, who arrived to Ransom Everglades as a 28-year-old English teacher in 1955 and never left, passed away on September 14, 2018. He was 89. Mr. Bowden spent 63 years at the school in Coconut Grove, teaching English for 43 years and also serving as a department head, college counselor and, most recently, Advisor to the Head of School.

Mr. Bowden engaged decades of Ransom Everglades students with his passion for literature, disarming wit, melodious elocution and penchant for the dramatic. A quintessential schoolmaster, he was beloved by former students, many of whom attended his 87th birthday party in June 2016 – an event that drew some 400 guests from across the nation.

“Today we mourn the loss of an extraordinary educator and a legendary figure in our school’s history,” Head of School Penny Townsend said. “Dan Leslie Bowden represented the very best in teaching and academic leadership, and he never lost his fervor for the poetry and prose that inspired him in his youth. I am grateful to have spent time in the glow of his brilliance, and only wish I had the privilege of experiencing him in the classroom.”

Born June 11, 1929, in Columbus, Ga., Mr. Bowden received his AB in English from Berry College, a small liberal arts school in Rome, Ga. After his graduation, he made his way to New York City, where he worked odd jobs including at a shipping dock. He spent time in Hawaii as a teacher at the Kamehameha School before landing an interview with Pierre “Pete” Cameron, then the headmaster of the Ransom School (the previous name of Ransom Everglades School). Mr. Cameron persuaded him to travel to Coconut Grove to teach English in 1955, and Mr. Bowden soon found a permanent home.

By 1961, he earned a promotion to assistant headmaster, though he continued teaching English. Mr. Bowden gained a reputation for impromptu poetry recitations in his classroom and throughout campus. He held a particular fondness for poet Emily Dickinson, and knew many of her works by heart. He left the classroom in 1999, concluding his tenure as a teacher by giving the commencement address that year.

“Dan Bowden is the best of Ransom Everglades,” said Timothy Greenfield-Sanders ’70, a celebrated filmmaker and photographer. “His remarkable wit, steely intelligence and old-school warmth are the DNA of the institution.”

After his retirement from teaching, Mr. Bowden served as either assistant or advisor to the head of school. His annual readings of Truman Capote’s “A Christmas Memory,” which became a Coconut Grove tradition, drew dozens every December to campus or, in the case of the 2017 reading, Mr. Bowden’s assisted-living residence.

Though his visits became less frequent as his health faltered, Mr. Bowden considered Ransom Everglades his home, visiting for commencement in May and the 2018 Alumni Weekend in April. At that time, he gathered with the 50th reunion class from the Ransom School, and met with the 2018 class of Bowden fellows – student recipients of the Dan Leslie Bowden Fellowships in the Humanities. Those fellowships, established by an endowment gift from Jeffrey Miller ’79, provide for summer studies in the humanities to rising seniors. Mr. Bowden is also immortalized on the Dan Leslie Bowden Library at the Upper School and through the Dan Leslie Bowden Chair of the English Department.

“Dan Bowden will always be the heart and soul of Ransom Everglades,” Mr. Miller said. “Through his love for his students and his inimitable classroom presence, he transformed our school and all of us who had the honor of knowing him. He will never be forgotten.”

Mr. Bowden was predeceased by his parents, Joseph Andrew Bowden and Annie Russell Bowden, and his three older brothers, Joseph, Thomas and Robert Bowden. He is survived by numerous nieces, nephews, grandnieces, grandnephews, and their children. His funeral took place in his home state of Georgia; Ransom Everglades held a Celebration of Life on October 15 (watch a video recording here), and a service of remembrance during the 2019 Alumni Weekend.


"Dan Bowden will take his place among the pantheon of leaders like Alice and Paul Ransom and the indomitable Harry Anderson '38," said former Ransom Everglades Head of School Ellen Moceri, "who made Ransom Everglades the extraordinary learning community it is."

Mr. Bowden's family requests that, in lieu of flowers, donations be directed to the Dan Leslie Bowden Endowment in the Humanities.
Ransom Everglades held a Celebration of Life for Dan Leslie Bowden on October 15 at the Lewis Family Auditorium. You can watch a video recording of the service here and view photos here.

The school also held a service of remembrance during Alumni Weekend in April, 2019. Mr. Bowden was laid to rest in Columbus, Ga., on September 22.
1 of 34

from Ransom Everglades School on vimeo

Coconut Grove, FL 33133
Middle School • 2045 South Bayshore Drive • Tel: 305-250-6850
Upper School • 3575 Main Highway • Tel: 305-460-8800
Founded in 1903, Ransom Everglades School is a coeducational, college preparatory day school for grades 6 - 12 located on two campuses in Coconut Grove, Florida. Ransom Everglades School produces graduates who "believe that they are in the world not so much for what they can get out of it as for what they can put into it." The mission of Ransom Everglades School is to provide an educational environment in which the pursuit of honor, academic excellence and intellectual growth is complemented by concern for the physical, cultural and character development of each student. The school provides rigorous college preparation that promotes the student's sense of identity, community, personal integrity and values for a productive and satisfying life, and prepares the student to lead and to contribute to society.