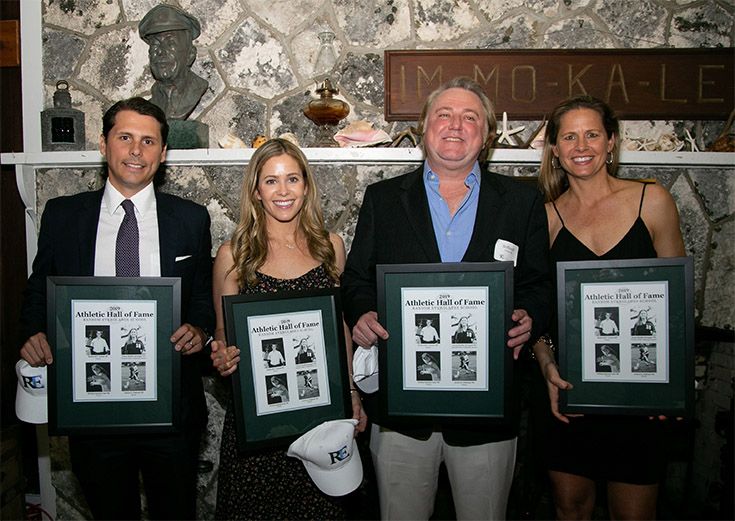 (2020 and 2021 ceremonies not held because of COVID-19)
Four Raiders – Bothwell C. Gonas '89, Jenny Stadler Krueger '93, Melissa Saiontz Luse '06 and Arturo C. Pedroso '03 – were inducted on April 11, 2019, to the Ransom Everglades Athletic Hall of Fame during an emotional and celebratory evening with friends, family, current Hall of Famers and other members of the RE community at the Pagoda.


Gonas, a nationally ranked tennis player in high school, attended the University of North Carolina at Greensboro on a full scholarship; Stadler Krueger, a star volleyball, soccer and track and field athlete at RE, walked on to the track and field and volleyball teams at Duke University, where she became a record holder in the javelin throw and volleyball starter. Saiontz Luse played tennis at Princeton University after breaking Chris Evert's record for the most high school tennis titles in Florida.

Pedroso still holds an assortment of RE all-time records in soccer, including the single-season record for assists with 31, and went on to play soccer at the College of the Holy Cross and American University.

Arturo C. Pedroso '03, 2019 inductee, said to the coaches in attendance

"Please keep doing what you are doing. It truly is special and transformative."

"I love being on campus. I feel like I'm home when I am here ... I am so honored to be here tonight with amazing teachers and coaches and administrators who are absolutely making a difference in the lives of kids."
1 of 4

Coconut Grove, FL 33133
Middle School • 2045 South Bayshore Drive • Tel: 305-250-6850
Upper School • 3575 Main Highway • Tel: 305-460-8800
Founded in 1903, Ransom Everglades School is a coeducational, college preparatory day school for grades 6 - 12 located on two campuses in Coconut Grove, Florida. Ransom Everglades School produces graduates who "believe that they are in the world not so much for what they can get out of it as for what they can put into it." The mission of Ransom Everglades School is to provide an educational environment in which the pursuit of honor, academic excellence and intellectual growth is complemented by concern for the physical, cultural and character development of each student. The school provides rigorous college preparation that promotes the student's sense of identity, community, personal integrity and values for a productive and satisfying life, and prepares the student to lead and to contribute to society.